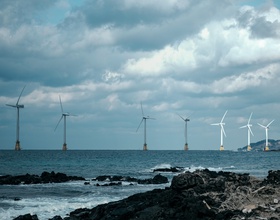 At the on-site HUSUM Wind trade fair in Germany, Minimax will be presenting, until this coming Friday, its fire protection solutions that are tailored to the special requirements of wind turbines

The amount of renewable energy in electricity consumption is growing steadily: At 23.7%, wind energy provided the lion’s share of gross electricity consumption in Germany. Meanwhile, the hydrogen economy, along with wind energy – especially offshore wind energy – is gaining ground. For more than 20 years, Minimax has been protecting these indispensable energy suppliers with approved and certified fire protection technology – both onshore and offshore.

Early fire detection: Minimax aspirating smoke detector AMX4004
The core of reliable fire protection is the early detection of fire and combating it by applying a fire extinguishing process without delay. Our answer to ensuring this happens is the aspirating smoke detector AMX4004. It can withstand vibrations and high fluctuations in temperature as well as extreme climatic conditions. It detects fires as they arise by continually extracting air samples from the monitored area. In conjunction with intelligent evaluator algorithms, a comparison of typical disturbances takes place prior to setting off the alarm, meaning that the AMX4004 is extremely foolproof.

Inert-gas extinguishing systems: environmentally friendly and no residue
The Minimax Oxeo Intergas extinguishing systems enable fire suppression adapted to sensitive and high-end facilities such as wind turbines. Inert gases are not electrically conductive and are non-toxic to humans, as they are a natural component of ambient air. They do not cool down and suppress fires without leaving a residue as well as being environmentally friendly. Normally, nitrogen is used in wind turbines but argon or mixed gases may also be used.

Minimax at HUSUM Wind: Stand 3A 08