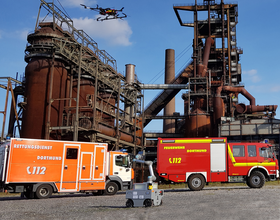 Supported by the German Ministry of Education and Research (BMBF)

Today marked the launch of the new specialist center on the former industrial site “Phoenix West” in Dortmund. Here, mobile robot systems for civilian hazard prevention are to be researched and developed. One of the center’s main features is the so-called “living lab” with in- and outside trial areas where the systems, together with their users, can be tested for their operational suitability in various scenarios.

The German Rescue Robotics Center is aiming to gain international recognition. For the first time in Germany, emergency forces, researchers and industry will work together to develop autonomous rescue robots and a robotics task force acting on a national and an international level. They will compile testing and inspection criteria in order to guarantee the standardization and certification of different robot systems in the future. The basis is built on the four lead scenarios: fire, collapse and burial, detection of dangerous substances and flood, as well as the ensuing challenges for rescue robotics.

The starting point for the specialist center is the increased complexity of the challenges encountered by authorities and organizations with security responsibilities as part of their everyday tasks. Despite good training, mature, tactical concepts and reliable safety equipment, every year numerous members of emergency forces around the world are injured or killed at work. As technical development progresses it is, however, conceivable that mobile robotic systems will increasingly be able to take on tasks in the future, in order to make the handling of operations more effective and safer for emergency forces, endangered people and personal protective equipment.

The requirements from operational practices will be used to develop the rescue robots. Beyond the initiation and funding phase, a scientifically oriented specialist center is to be developed in order to make more efficient robotic technology available to rescue teams on the market.

The Project
The project is being supported with an initial investment for four years by the German Ministry of Education and Research (BMBF) and will be led by an interdisciplinary and well-known association of users, industry, universities and research institutes. The funding is part of the German government's “Research into Civilian Safety 2012- 2017”, as part the topic area “Civilian Safety - Innovation laboratory / specialist centers for robotic systems in hostile environments” (Funding code13N14852 to 13N14863)