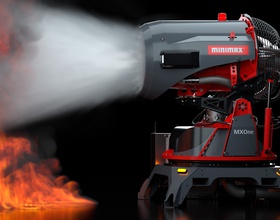 Today, Minimax is launching the extinguishing turbine MXOne. This unique system has a 360° operating range and enables the highly precise application of water mist from a significant and safe distance. In the event of a fire, the water mist absorbs a huge amount of energy, cools particularly effectively and reaches hidden fire sources better than classic monitors. It binds flue gases, pollutants and odors, and is able to exert its efficiency quickly over large areas. The effectiveness of the turbine has been examined and confirmed in full-scale fire trials conducted by independent bodies, including DMT.

MXOne can be operated with potable water, seawater and with/without foaming agents. Spray patterns can range from a fine water mist to a full jet. The firefighting system reaches a flow rate of up to 4,000 liters per minute. MXOne can be aimed at a hot spot either fully automatically or manually via remote control. Thanks to a smart operating system, a single turbine can supply water alternately to two or more neighboring areas. Consequently, several fires can be fought in parallel, or nearby facilities threatened by fire can be specifically cooled in a targeted manner. The turbine can be easily integrated into existing plants and is suitable for use in areas with temperatures ranging from -15°C to +55°C.

A decisive innovation: throw distance
MXOne has the unique ability to fight a fire with water mist from a significant distance. The turbine is able to offset the susceptibility of small droplets to external factors such as crosswinds or headwinds using a smart control system and activating a supporting air stream. Furthermore, the system can be flexibly adapted to meet almost any challenge posed by different fire scenarios.

Efficient firefighting with water mist
When extinguishing a fire with water mist, the water is atomized under high pressure, meaning the smallest of water droplets and a larger reaction surface are formed that absorb heat. When water evaporates, its volume is increased many times over, thus displacing the oxygen at the source of the fire. The smothering effect fights the fire directly. The cooling aspect of the water mist protects people and property from the effects of heat. The volume of water consumed during the firefighting effort as well as the consequential damage caused by the water are extremely low.

Maximal flexibility in positioning and application
The control and direction of the extinguishing turbine can be done fully automatically, as follows: Information from at least two fire detectors (e.g. UniVario industrial fire detectors or infrared cameras) is assessed in the fire alarm and control panel and the location of the source of the fire is accurately determined before MXOne is activated. Alternatively, manual control of the turbine is always an option. Both stationary and mobile control variants can be implemented according to the operator's requirements.